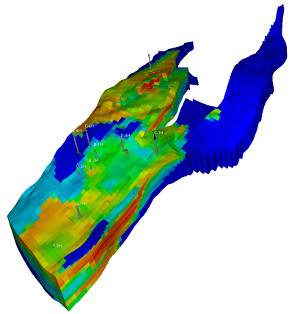 On September 14, 2015 Alf Birger Rustad announced on the mailinglist of the "Open Porous Media Initiative" (OPM) that several data sets describing test and real world oil reservoirs are now available to the public under the Open Database License. This is a novel approach in the oil industry that usually is known for its secretiveness in this and other regards.

Consequences of the Open Database License

The data is free as in freedom. This license grants you many rights but you are not allowed to trim these rights for other people even if you change the database. More information can be found in the summary of the license.

For a more current list of data sets see the OPM web page.

All the models are available as Eclipse input data. OPM has made every effort to be able to parse this format and run the corresponding simulations.

The most prominent data set is the Norne oil field. Before it's release as open data the Norne field data was only available as a benchmark case to universities for research and education purposes. It was hosted at the iOCenter of NTNU.

The oil field was discovered in 1991 and brought into production by Statoil in 1997. While the initial plan was to shut it down in 2014 production might continue until 2030 as announced by Statoil in 2015. As of 2010 there were 50 drilled wells, 16 active ones, 10 water injectors (8 active), and 7 observation wells. For more information about the field see the iOCenter of NTNU.

The data set contains data to simulate 3312 days of oil recovery with real reservoir data. It should serve as a key benchmark for the petroleum industry. It is and will be used to evaluate mathematical methods and their software implementation.

The following synthetic standard benchmark cases are included in opm-data:

While these have been available previously it was unclear under what license that was the case and how to obtain them. Therefore this seems to be the first case that they are bundled together, have an official license attached to them, and are openly available.